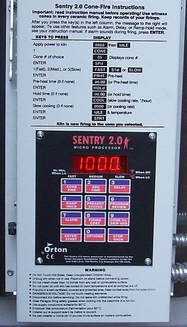 I’ve talked a little about what happens during a firing in other articles, but now for the practical application as it relates to potters.  I will be including my firing schedules here as examples, but please take these as rough guides only, as different clays and glazes will have different temperature and time requirements.

When I first bought my electric kiln it came with manuals and pre-set cone firing programs.  I could literally just punch in the cone I wanted and the kiln would do the rest.  I imagine this is probably what a lot of people new to pottery would do, rather than set their own schedule, but it’s not necessarily the best idea.

Here’s what my manual advised:

These were approximate times, however, if you do the maths you’ll find that the recommended low firing schedule would only get up to 500°C (932°F) after the 3 hours given, which is a good 85°C (185°F) under cone 022.  Similarly, mid firings would take you to 857°C (1,575°F) after 7 hours and 15 minutes, approximately around cone 012.  And high firings were hitting 1,033°C (1,891°F) after 9 hours and 40 minutes, which comes in at around cone 05 – more than 100°C (212°F) short of the minimum cone 1 which they consider to be a high fire cone.  There is a note at the bottom of the tables saying that the times will vary depending on which cone you’re aiming for and the rate at which you ‘ramp’ up, but using these ramps (rates per hour), firing to cone 10 would take an estimated 14 hours (assuming that it continues on the final ramp until it’s reached its target temperature).

I don’t know about you, but I don’t have that sort of time to spend on a firing, especially as you really should be checking it at frequent intervals. 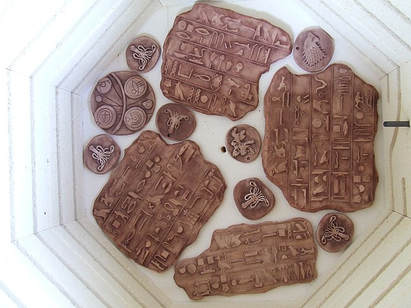 Aside from the times, the other thing that struck me as odd was that they had a single cone program for both bisque and gloss firings, when the requirements for each are quite different.  As I covered in the previous article, bisque firings have to be taken up slowly but can sprint at the end, whereas the gloss (generally) can be taken up fast at the beginning but must slow down as they approach temperature, depending on what your glaze requires.  Some also may need to ‘soak’ and be held at particular temperatures, and others may need controlled decreased in temperature, but this is all information that should come with the specific glaze you use.  For a basic fire up and cool down, the rule of thumb is that bisques are slow/fast and glosses are fast/slow.
With that in mind I developed two separate schedules for my own firings.  I’ve played around with them a bit when trialing different glazes, but for a standard oxide/underglaze mix I’ve found the following targets and ramps work well on the particular clay that I use. 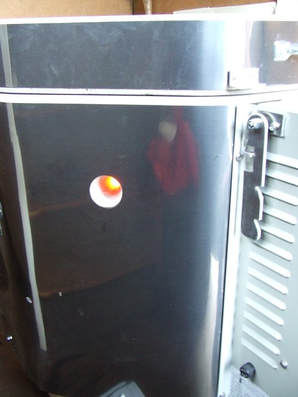 You can see my incredibly attractive welder's gloves in the reflection
As noted in the bisque, it’s recommended you keep the peephole open till at least 400°C (752°F) to ensure all moisture has had a chance to escape.  You can check this by holding a mirror – carefully! with welder’s gloves – up to the hole and seeing if there’s any humidity forming.  If there is, leave it open and check again in half an hour.  The reason for this is that humidity during a firing can coat the kiln elements and corrode them, greatly reducing their lifespan.  With how much it costs to get them replaced, you’ll want to avoid anything that may damage them, especially if it’s as simple as keeping a plug open for the first couple of hours of a bisque firing.

An alternative is to invest in a ventilation system, such as a kilnvent.  These require two small holes to be drilled into the kiln through which they pull a small amount of outside air and remove the humidified heated air.  They claim to extend the life of the kiln’s elements, to equalise the internal temperatures, reducing the appearance of hot and cold spots while having little impact on the length of the firing and – if kept on during cooldown – will decrease the amount of time you have to wait until you can open up the kiln safely.  All this sounded pretty good to me, so I ended up investing in one, especially as my shed lacks adequate ventilation so with the kilnvent I’ve been able to direct the kiln’s off-gassing out the open door rather than let it build up inside the small shed. 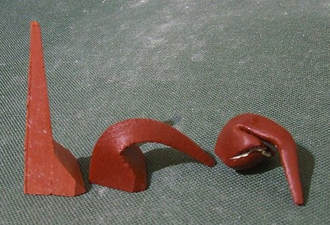 So, things to keep in mind when deciding upon your own firing schedule:

·         Don’t just go with the pre-loaded ones that come with the kiln, they may not take the different requirements of bisque and gloss into account.

·         Take your bisque up slowly to safely boil out the water, but gloss firings are generally fine to take up quickly from the beginning.  Gloss firings are slowed down towards the end because many glazes need more stable temperatures once they’re molten – some require ‘soaking’ at a particular temperature for a length of time, so always check the instructions that come with your glaze.

·         It’s important to ‘sync’ everything in your kiln to the same temperature.  Clays, oxides, underglazes, glazes and certain kiln furniture will all have optimal or maximum working temperatures.  In the cases of colourants (oxides, underglazes and glazes), going too high will likely result in colour being burned out or an unexpected texture developing.  Firing clay too high may cause it to slump and become disfigured.  And kiln furniture (shelves, pillars, bead racks and tile stackers) can become structurally unsafe when their maximum recommended temperature is exceeded – this can damage your pieces or, at worst, your kiln itself.  Finding a temperature that suits all of the above can be frustrating but is a necessary step in perfecting your firing.

·         Always always always let your kiln cool down before opening.  It’s recommended it be at least under 200°C (392°F) before even opening a crack, but personally I wait until it’s below 50°C (122°F) so I’m able to handle the pieces.  Opening it too soon will result in the sudden shift in temperature causing the pieces to crack and be destroyed.  Don’t waste all your hard work to a moment of impatience right at the end.


It takes a bit of effort to get to ‘know’ your kiln and how to work with it for your particular type of clay and glazes, but it’s worth the time to get the most out of it and be able to consistently produce high quality ceramics.
Back to Claywork Tutorials