Carving 'Banner of the Horse Lords'

I like battles, perhaps a little too much, so it’s no surprise that my blood starts pumping to hear someone yell, “For wrath, for ruin and the red dawn!  Forward Eorlingas!”
Come on, admit it, you have to restrain yourself from joining in the battlecry there too.  No?  Just me then. 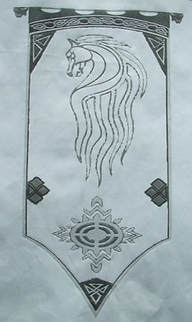 In either case, the Lord of the Rings was an iconic trilogy in all senses of the word, bringing to life cultures and races of which we can only dream.  I paid homage to both the Elves and Dwarves in my earlier piece, 'Speak Friend', so I thought it high time to give a nod to the human contingent, specifically the Riders of Rohan, which feature strongly in both the second and third movies.
For the people of the Riddermark, horses are treated as their kin, there’s an almost spiritual bond between mount and rider that tugs at the heart of any child who ever wanted a pony.  This is clearly evident in their architecture and decoration where horse motifs dominate.  There’s a wide range of different banners seen within the throne room of Theoden, but the one that’s always appealed the strongest to me has been the stylised horse head which is reminiscent of the Uffington White Horse carved into the rolling hillside of country England.
My only modification was that I wanted it to face left – I have quirk where I prefer left, a lot. 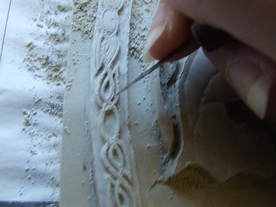 So with the necessary alteration in place, I began work on what I hope will be the first of a whole series of sci-fi and fantasy-themed banners.  As per other pieces, I’ve chosen a size of approximately 20cm as a good compromise between manageability and display quality.  Any larger and it starts becoming problematic in terms of handling, not to mention a much higher chance of warping and splitting in the firing process, and any smaller it doesn’t make as much of an impression while hanging on the wall. 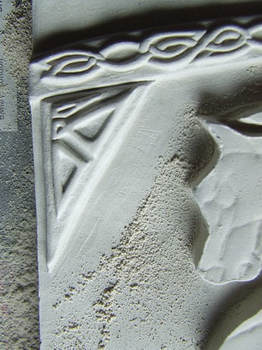 Originally I had planned for this design to be my trial piece for my first video tutorials.  I wanted to show people the process from start to finish (sped up, of course, unless you have a spare 20-30 hours to spend on YouTube) with a single piece, to make clear exactly what was involved and to help give tips for anyone interested in trying out similar techniques.  So I made the first video and edited it, put it up on YouTube, but wasn’t happy.  For starters, I was still working to a shoe-string budget and as a result had everything covered with paper, which looks kinda messy.  Now I’ve splashed out to the tune of a whole £6 and bought hard-wearing waterproof canvas that I’ve laid down on my worktable and use as mats to stop the clay from sticking to the boards.  Much as I joke about the cost, it’s made a massive difference in the visual quality of the video.

Secondly, I made the mistake of connecting my new whiz-bang webcam to a zany extension arm that was connected to the desk that I was working on.  As soon as I started rolling out the clay it turned into an extreme sport as far as the camera was concerned, and any little movement thereafter would simulate a 4.2 on the Richter scale.  So the arm had to be moved to another anchor point, which now puts the camera hovering directly above the piece that I’m working on – far better in terms of visibility, although it does mean that if I bend forward I clobber myself on the noggin’ (but hey, at least it helps my posture).
So I’m afraid you won’t be seeing this piece evolve with the modern magic of cinema (well, YouTube), but luckily I took a lot of photos so I can prove that this was, in fact, a featureless lump of clay not all that long ago. 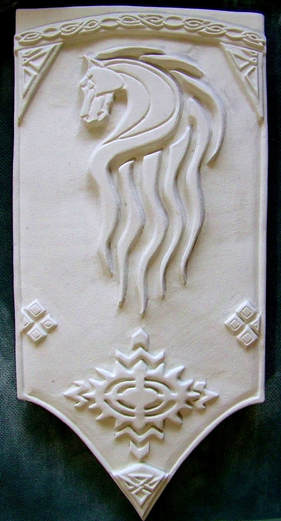 For the latest - and far better -  tutorial videos, explore my...